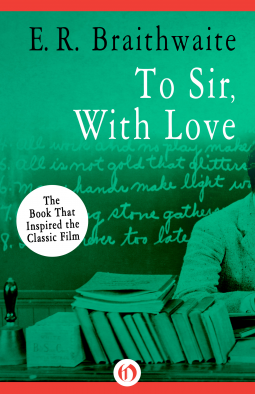 To Sir, With Love by E. R. Braithwaite

“To Sir, With Love” is the story of an extraordinary teacher who is trying to teach his students  (among other things…) to see the world and humans in it for more than just their skin colour.

In this book we meet Mr. Ricardo Braithwaite, a former Royal Air Force member, who is assigned to be a teacher at a school called Greenslade that has somewhat peculiar philosophy for the time, as there’s no corporal punishment and little discipline.

It is quite interesting to follow Mr. Braithwaite’s first steps to getting through to the class of the oldest students in the school, and to actually teach them something. In a way it is something that anyone who’s been in a teaching situation has gone through – trying as hard as you can to make it interesting and relevant, but for some reason not succeeding. Fortunately Braithwaite does find a way to reach the students – he treats them as adults and expects them to behave as such.

One part of the story is in a way a coming-of-age story of the whole class taught by Mr. Braithwaite. In another way it depicts the somewhat cruel reality of a coloured person in the United Kingdom in the 1950s – not getting a job he’s actually well qualified for because of his skin colour, being treated rudely at a fancy restaurant or not getting to rent a room simply because of not being white.

Another issue rises when Braithwaite starts going out with a colleague, Gillian, who gets upset the first time she sees how he is treated and doesn’t seem to do anything about it. Although Gillian overreacts in the beginning, then throughout the book it can be seen that her parents, who can happily enough talk to their daughter’s Negro friend, don’t really approve of it and see more problems coming up in the future – in Gillian’s father’s words, children from mixed marriages wouldn’t be wanted anywhere or by anyone. Mr. Braithwaite’s answer to that claim should be looked upon as a good example and he as a role model, and even just for that scene this book deserves to be read and thought about.

The book was first published in 1959, more than fifty years ago, surely things have changed?

No, is the obvious and simple answer, as racial discrimination might not be a problem in places where it was seen as one fifty or a hundred years ago, but countries that for one or other reason haven’t been too welcoming for people of different religions or races in the previous century (such as former countries of the Soviet Union for example) appear to be facing same problems now – it seems this phase of xenophobia just has to be survived…

I liked this book quite a lot more than I liked the movie when I saw it some years ago, although I have to say that I didn’t realize there were racial issues presented there. Although, as I must have been around fifteen at the time, it’s no surprise I overlooked that part, and thought the student-teacher interactions more important.