How come is Eddard Stark’s leg in a plaster cast, when the general level of science and technology doesn’t seem to be much higher than approximately late middle age the latest? 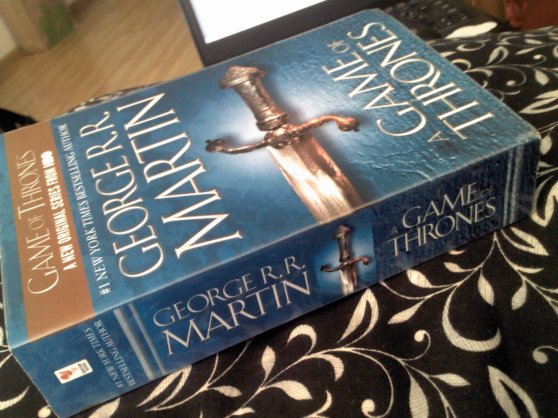 A Game of Thrones by George R. R. Martin

There are people who love the series and those who don’t really care much about it, and don’t get why it’s so popular. I was one of the second kind. Now after finishing the first book I’m somewhere in-between.

So basically we have several power-struggles going on throughout the world, and we see it through the eyes of different characters. There are obviously awful characters, characters who are the good guys (or seem to be) and some who don’t fit in either of those categories.

There’s sex and violence so I guess there’s not much more you’d need for a bestseller….

I’m not saying it’s a bad book. There are so many points of view, that at least one will get your sympathy, and since you want to know what happens to them, then you keep reading…

Honestly I’m just happy to have finished reading it, but I have to admit that the ending makes me want to continue reading it, since there’s quite a lot of suspense.

Otherwise though the question of Eddard Stark’s plaster cast… was it just a splint? He shouldn’t be running around, but should be in bed resting, as would be appropriate considering everything else. That’s what bothered me. But of-course it’s fantasy, so maybe indeed medicine advances faster in that world… or it’s just my imagination that puts his leg in a modern cast…

What is this book about?

In general one could say that it pretty well follows an idea that is mentioned several times in the book: “When you play the game of thrones, you win or you die.”
So we have a cast of characters, who are all connected to one-another somehow. We have the family Stark, who reside in Winterfell. When the King’s Hand (not the real hand, more an assistant guy or something) dies, Eddard Stark is asked to be the new King’s Hand and he leaves with his two daughters Arya and Sansa to go and serve the king, while he leaves behind his wife Catelyn and his sons.

There are however suspicions whether or not the previous hand died or was killed somehow.
One of Eddard’s sons, Jon Snow, is leaving as well and going to the Wall – a border between the Kingdoms and some wild parts of the world, where there are dangerous and mysterious creatures, to keep watch.

But then we have some other people there: a sister and brother who have lost their kingdom and are scheming to get it back (the brother mostly).

Changes are going on in the world, so there’s plenty of events afoot, that you can read about…