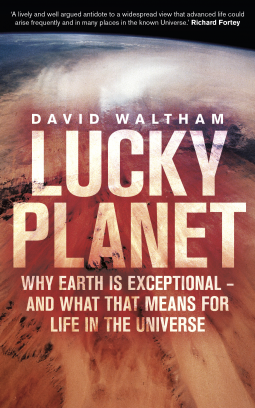 Lucky Planet tells the story of our lucky blue planet, that is just about right for life to have evolved here. Waltham shows in which ways exactly Earth has been lucky and what are some of the prerequisites for a habitable planet.

Earth, the third planet from the Sun is home to (moderately) intelligent beings who throughout history have speculated on the possibility of life on other worlds. This book shows why we might not ever succeed in finding life somewhere else as the Earth itself has been very fortunate in having had a rather stable climate and despite several episodes of extinctions life still thrives.

You can find out what are the characteristics that enable life to exist here, and not for example on Venus or Mars. Although they orbit the same star, they’re at different locations and have atmospheres that don’t remind the Earth’s atmosphere. Why does the Earth’s atmosphere have just such a composition and not some other?

I found this book interesting, as it introduces the biological, chemical, geological and astronomical aspects that go into making Earth a habitable planet. The author supports the Rare Earth hypothesis, but you can also read about the Gaia theory, which sees the Earth as a living system capable of regulating it’s climate and conditions thanks to life.

This book makes for very good reading. However if you’re hoping that there’s some intelligent civilization somewhere nearby in our galaxy, this book might be a downer, as it makes it obvious that we’d be searching for a long time, if life indeed needs such strict conditions.

I received this book for review purposes from NetGalley.com