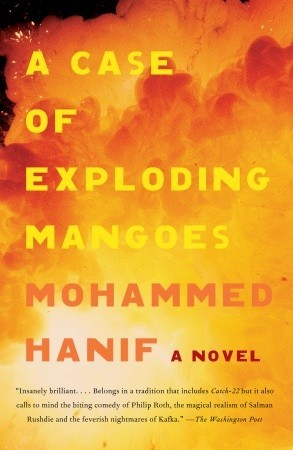 A Case Of Exploding Mangoes by Mohammed Hanif

This book starts with a planecrash. And I started reading it in the beginning of a two week vacation in July on a plane. So it was quite appropriate, although when my boyfriend asked me what the book was about, he did get a little nervous when I mentioned an airplane crashing (he thought that explosion and plane crash aren’t appropriate vocabulary on a flight).

The story takes place in Pakistan and follows some months in the lives of several people between whom you wouldn’t think are connections, but even the beginning lets you know that somehow the connections are made.

One of the people is Ali Shigri, who is in the army and a silent drill instructor, whose life takes quite interesting turns when his roommate Obaid disappears.

Another character in the book is General Zia ul-Haq, a dictator, whose too scared to leave his house as he doesn’t know (and the secret service doesn’t know either) who is planning to kill him.

The exciting part is that you find out in the beginning that the dictator dies in the plane crash and Shigri has something to do with it, and all that the reader has to do is find out what exactly happened and why.

And believe me, it’s all quite dark and in some rare parts oddly funny, and although the end seems clear, as it’s in the beginning, the solution came as a surprise, not with a twist but there were some unexpected components.

One thought on “Book 150: A Case Of Exploding Mangoes by Mohammed Hanif”