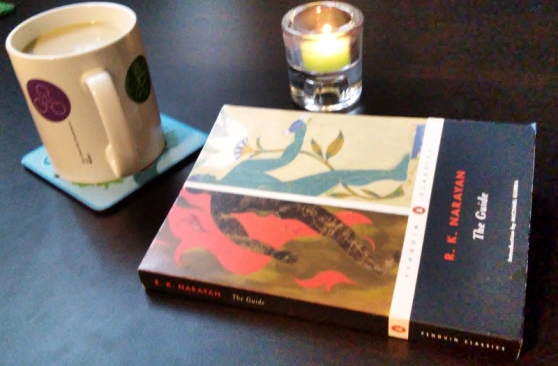 The Guide by R. K. Narayan

“The Guide” follows Raju, who we meet at different times of his life, learning about how he becomes known as Railway Raju, how he works as a guide and meets various people, and how he ends up being called Swami and fasting in hope of bringing down rain on a drought-stricken area.

The characters in the book are fascinating and full of life and very well thought out. I really like how there’s barely any physical descriptions of people or places, but I could imagine the situations and people vividly.

What happens to Raju is all quite unexpected. To me the most interesting part was about Raju’s changing attitude throughout the book.

Sinec I’ve been a guide I found his attitudes towards that great -the excitement and enthusiasm and meeting new people who you only see once, and then there are the few exceptions that might stay in your life for a long time. And the eventual (though maybe not inevitable) decline into pessimism and boredom of having seen it all and talked about it to people who have been more interested in it.

Another bit that just made me chucklewas ofcourse the things that really do come up a lot when you’re a guide – someone’s asking about something you don’t know, you try and guess at the answer, and they obviously know better, or when they’re the one doing all the talking and you’re just learning about what you should have known before.

In general it’s a great Narayan book to read.