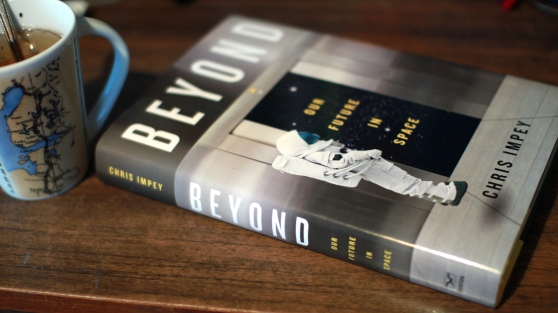 Beyond: Our Future in Space by Chris Impey

If you’re even just a tiny bit interested in or intrigued by space travel then this is definitely a must read that grips with it’s wide scope and fast pace and won’t leave you resenting mathematical equations you don’t want to concentrate on, as there are no ( in fact there’s E=mc2, but that’s all and it isn’t explained) equations you need to pay much heed to.

The book starts with the past and ends up looking far into the future. In the beginning you get a glimpse into the space race between the US and the Soviet Union and even before that into the history of rocketry (don’t worry, you won’t have to understand rocket science to read this part!).

After the first few chapters of bits about history we get to the present and get an overview of basically who’s up and coming on the space scene – how NASA and Roscosmos are faring and how the Chinese are catching up and possibly might lead the way back to the Moon, but you also get to read about the major players in commercial spaceflight and about the people behind it – Burt Rutan, Elon Musk and Richard Branson to name the major players.

At about the middle you get to the prospects for future – is it likely humankind will colonize the Moon or Mars and how can we get there and how would terraforming work anyway? The book dips into technologies that aren’t yet feasible, and also looks at some other interesting topics/problems the future might hold – is there life on other planets? Has humankind survived the most crucial and dangerous part of it’s evolution or is it still ahead of us?

“Beyond” is an excellent book both for it’s choice of content and for the writing – it’s simple enough yet not too basic and the topics follow in a logical order and fast enough so even when you don’t particularly care for history or SETI or any of the smaller topics covered, you’ll be through with it soon enough anyway. 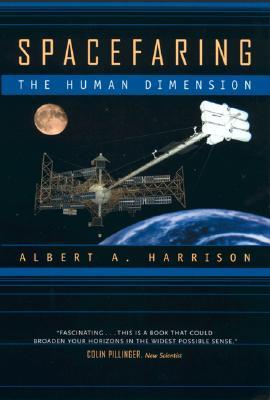 Spacefaring: The Human Dimension by Albert A. Harrison

What can go wrong on a space-mission? How to choose a crew and why did the soviet space mission managers send their cosmonauts on month-long car-trips across the Soviet Union?

For me it was interesting to read that there had been a noise problem on a space station – in my imagination (fueled by videos of ISS astronauts talking about their life there) space station would be quiet, but apparently it hasn’t been like that always, or is it quiet even now, with all the computer buzzing and life support certainly makes noises too…

I’d say it is an illuminating book for space enthusiasts, though it is more than ten years old, from a time when ISS wasn’t yet finished nor continuously inhabited and space shuttles still flew, and Columbia hadn’t disintegrated, so while in this book a lot of examples come from the Russian Mir space station,  the conditions on ISS are somewhat different, and we’ve learned a lot more about life in space in the mean time.

This book deals with the space-age dreams that some of the optimists had mostly in the second half of the twentieth century in the USA. Among those are space colonies, the Roswell incident, going to Mars and further with manned missions, finding extraterrestrial life etc.

I very much liked the concept of the book – showing what were some of the most commonly held dreams beginning from around 1960. and what happened to them as reality hit.

It was certainly interesting to read about the Apollo astronauts and their preoccupation on the Lunar missions with the blue marble of the Earth and the homesickness, stumbling on Earth months later as they could keep their eyes away from the sky…

And then you can read about the dreams of colonies and habitats in space and dreams of further manned exploration in space that until today have not taken shape.

Definitely another dream is the one that is the goal for SETI – the Search for ExtraTerrestrial Intelligence – I found that part quite interesting, and Benjamin goes into quite a lot of detail in writing about SETI@home.

Overall it was quite an interesting read, although I did get annoyed reading about Roswell, as well as reading about Alphaworld, the latter of which didn’t make any sense for pages – I kept thinking “what does that have to do with anything?”.

In case of Roswell – the author isn’t a “believer” (nor am I), but it seems a bit too far from the general flow of the book. Describing the incident, the people who “saw the aliens”… No thank you, I presume there are enough books that go into sufficient detail the same way talking with the locals etc. Is it really necessary to have it in this book as well? Maybe for the sake of increasing sales…

Ofcourse I’m preconditioned to tense up when I hear “Roswell” mentioned at work, as it’s a sign of trouble… (as are “horoscope” and any mention of a conspiracy ).