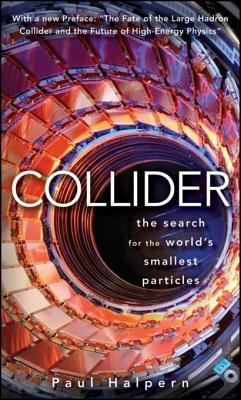 Halpern’s “Collider” tells the story of how scientists over the past century or so have discovered elementary particles, at the same time introducing the scientific methods and the people behind the discoveries.

It is an informative read, and definitely a good introduction to the topic.

It makes for interesting reading, as the book starts with Large Hadron Collider (LHC) and elementary particles and the hunt for the Higgs boson, but on the way to the end of the book one can also read about how and why research in high-energy physics is important for cosmologists and astrophysicists.

The book is written so that one doesn’t need a background in mathematics or physics to understand most of the text.

I quite liked how the chapters seemed almost to melt into one another, and Halpern doesn’t stop on one topic too long so the reader won’t get bored reading for example about only one particle’s discovery or one detector in the LHC.

In “Collider” you get an impression of the scale of the instruments that are needed for cutting-edge research, and the accelerators mentioned are a good example of something that costs a lot for the tax-payer, although it’s not quite evident how the general public will (if ever) benefit from the research similarly to astronomy and ever bigger telescopes.

In the end of the book Halpern also tackles the topic of some of the fears that people have had concerning LHC and the possibility of creating miniature black holes, strangelets and magnetic monopoles and whether or not they’d even have any effect on Earth.

It would be good additional reading when studying elementary particle physics, to get a better feeling for the background etc.

So how about those antimatter engines? Bad luck if you read this book – you’ll realize it’s way beyond the Earth’s economy unless we find a natural source of antimatter in our Solar System’s vicinity.

It’s a rather good supplement to anyone interested in particle physics, and also for sci-fi fans in order to shatter your dreams of fast interstellar travel without wormholes 🙂

I personally liked it and didn’t find it too difficult (but then again particle physics is basically my second favorite branch of physics and I’m thus somewhat acquainted with it).

As a bonus it’s only around 150 pages and there’s barely any maths involved.

Sometimes it’s enough to hear a book mentioned once to go out of my way to try and find and read it. With this book it wasn’t so. I’d heard or seen it mentioned on several occasions and yet, when I finally had the book at an arm’s reach, it stayed there among numerous other books for some months, I suspect that despite everything I still judge a book by its cover and this one doesn’t make you want to grab it and read it at one go.

However now that I’ve finally finished reading it, I have to admit that it’s great despite the fact that even a Quantum Mechanics textbook on my shelf looks more inviting than “The Inflationary Universe”.

The subject for the book, as the title suggests, is the inflation theory, which is a hypothesis that after the initial big bang start for the universe, there was a period of rapid inflation, in which the size of the universe grew exponentially, making it possible for whatever it was that was involved in the big bang to be a lot smaller than in the original big bang theory.

By the way, if you happen to be a fan of the series “The Big Bang Theory” and you’re maybe a little more interested in physics and cosmology than Penny is, then I really recommend reading it. You’ll find some topics that have been mentioned in the series, for example magnetic monopoles.

It covers all the topics necessary for understanding the inflation theory and the road to it – modern cosmology, particle physics and grand unified theories.

I liked it, but I have to warn anyone planning to read “The Inflationary Universe” – it does contain cosmology and particle physics.

It isn’t necessary to understand a lot of mathematics though – it would be difficult to find any equations in the book, but without elementary familiarity with the big bang theory and particle physics, it wouldn’t be easy to read and comprehend. If you’re unsure, read Peter Cole’s “A Very Short Introduction to Cosmology” or something similar before starting on “The Inflationary Universe”.